I read this great blog by Dave Secomb on Inquire Within about Why Creativity is Important in Education. He references Ken Robinson‘s work in Out of Our Minds.  He explains how innovation is a process that requires three parts:

This is a very clear description of words we are using in reference to education every day. Innovation is a word we hear a lot of lately, not only in education but in business and one’s daily life.

I  believe one more important aspect of innovation is the ability to think together.

This video (Vimeo, 2:44 min.) on thought leadership explains the process that leaders might go through to spread innovation. 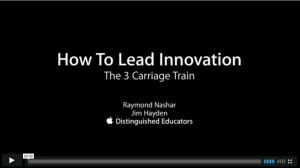 It suggests that working with and supporting the critical mass is the best place to put one’s energies. Trying to convince the people who are not interested is a waste of time. Working with the people who already support the innovation, while it may be fun and energizing, is like preaching to the choir. In order to reach the ‘tipping point,’ work with the critical mass.

In her TED talk Dare to Disagree, Margaret Heffernan  tells an inspiring story of Dr. Alice Stewart. In the 1950’s Dr. Stewart discovered a two-to-one correlation that children who died of cancer had mothers who had been x-rayed while pregnant. The data was statistically clear yet the information “flew in the face of conventional wisdom.. And it flew in the face of doctors’ idea of themselves, which was as people who helped patients, they didn’t harm them…The data was out there, it was open, it was freely available, but nobody wanted to know. A child a week was dying, but nothing changed. Openness alone can’t drive change.”

It took 25 more years before doctors stopped x-raying pregnant mothers. Stewart never stopped fighting. She had a fantastic model for thinking. She worked with a statistician, George Kneale. Kneale saw his job was to prove Dr. Stewart wrong and to create conflict around her theories. Through this, he was able to give Stewart the confidence to prove that she was right.

It’s a fantastic model of collaboration –thinking partners who aren’t echo chambers. I wonder how many of us have, or dare to have, such collaborators. Alice and George were very good at conflict. They saw it as thinking.

As someone who will often ‘hop on the first carriage of the train’ when it comes to educational innovation, I appreciate that I work with so many colleagues who are my thinking partners. Sharing and discussing conflicting ideas is  a powerful way of collaborating.

Thank you to all of you who collaborate critically and respectfully. It is definitely helping me form more complex opinions of how  to revolutionize education.

Watch the full TED talk of Dare to Disagree here:

One thought on “Dare to Disagree” 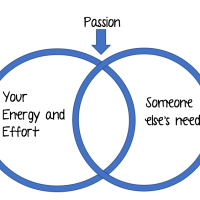